Reflexology is a gentle, potent treatment which involves stimulating points known as reflex areas or zones on the feet, hands and ears but most commonly the feet. This type of massage has been used for several thousand years and can be traced back to ancient Egypt, India and China.

Reflexology was popularised by the late Eunice Ingham who based her method of treatment on work called Zone therapy described by an American ear, nose and throat specialist, Dr William H Fitzgerald in 1915. Dr Fitzgerald noticed that pressure on one part of the body seemed to produce a corresponding effect on another part of the body. He introduced the idea of ten vertical zones of energy from the head to the feet, not unlike the concept of Chinese meridians.

Eunice Ingham developed Dr Fitzgerald’s concept still further and mapped out reflex points on the feet and hands, corresponding to all the organs, glands and parts of the body. She named her work reflexology. One of her pupils, the late Doreen Bayley introduced reflexology to the U.K. in the 1960s.

Reflexology is not a diagnostic therapy. A reflexologist will seek to bring about balance in the body through working the reflex zones with its corresponding effect on the part of the body the zone relates to.

Reflexology is a natural, drug-free approach to relaxing the body and mind. It balances the circulatory, excretory, digestive, endocrine and immune system, helping the body to expel toxins and promote healing.

How does reflexology work?

The premise behind reflexology is that following illness, stress, injury or disease the body is in a state of imbalance. Vital energy pathways can be blocked which prevent the body from functioning efficiently. Reflexology can be used to restore and maintain the body’s natural equilibrium and encourage healing.

A Reflexologist detects deposits and imbalances in the reflex zones. By working on these points, blockages can be released and the free flow of energy can be restored to the whole body, easing tension, promoting circulation and improving elimination.

The benefits of reflexology 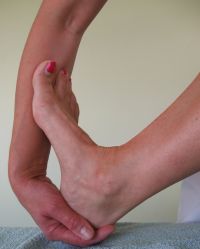 Generally takes place with the client lying down on a massage couch, although in some instances people choose to receive a treatment sitting up. For the most part, the sensation is pleasant and soothing although there may be discomfort in some places. This is fleeting and indicative of congestion or imbalance in the corresponding part of the body.

Reflexology can help to induce deep relaxation and is believed to stimulate the body’s own healing mechanisms.

With approximately 75% of all illnesses said to be linked to stress, it’s not surprising to see the growing popularity of reflexology as a means of feeling healthy through stress relief. Stress can drain the immune system, leading to a greater susceptibility to colds and flu. It can also cause tension which can result in neck and shoulder stiffness and headaches.

After treatment and for several days afterwards there can be an increase in wellbeing and energy.